3D
Scan The World
2,498 views 209 downloads
Community Prints Add your picture
Be the first to share a picture of this printed object
0 comments

Pharaonic period, lions were relatively few in Egypt, but were at the same time significant to the Pharaonic Egyptians. However, it was probably during the prehistoric times that they became a symbol with religious associations. It was the lion-god Aker who guarded the gateway to the netherworld through which the sun passed each day and so, since the sun was born each morning and died each evening on the horizon, the lion was associated with death and rebirth.Most lion deities (and cat deities) were female, of which Sekhmet was almost certainly the most important. In fact, her cult was eventually merged with Mut and the cat goddess Bastet. Maahes was an ancient Egyptian lion-headed god of war, whose name means “he who is true beside her”. 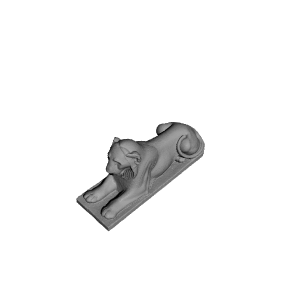 ×
0 collections where you can find Laying Lion by geoffrey.marchal