3D
2,637 views 66 downloads
1 collection
Community Prints Add your picture
Be the first to share a picture of this printed object
0 comments

I wanted to place LEDs on the arms of my mini quads, but there is simply no place to put them. I decided that the best option was to make a tailor made LED holder that makes it possible to mount a standard 50mm LED strip segment (the kind of LED strip you buy by the meter). The holder is mounted by sandwiching the base between the motor and the frame. It is just 1mm thick, so not much height is added. I have made it light weight rather than ultra durable.Print a few and replace them if you crash. Every gram counts.

If there is demand for a more rugged version, I could beef up the dimensions a bit and publish the result. Just let me know in the comments.

I use the brilliant DYS1806 motors, so the holder is made and tested on those. There are other 1806 motors that seem to be close copies of the DYS1806. I guess that the holder works for those to. 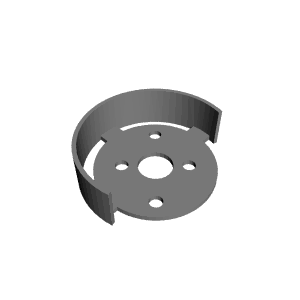