Limestone Bust of Queen Ahmes at The British Museum, London

3D
Scan The World
3,534 views 187 downloads
Community Prints Add your picture
Be the first to share a picture of this printed object
0 comments

Limestone Bust of Queen Ahmes at The British Museum, London

This is a limestone bust of Queen Ahmes-Merytamun, wife of Amenhotep I, was depicted around 1550 BC, in the early 18th Dynasty, wearing the Hathor Wig, New Kingdom. Giovanni Belzoni discovered this piece of a rare early Eighteenth-Dynasty sculpture while working in Karnak in 1817, in the area now known as the Eighth Pylon, a gateway on the southern axis of the temple. He found the statue in two pieces, removed the upper part and intended to return for the lower. He failed to do this, and the lower part is still visible there today. 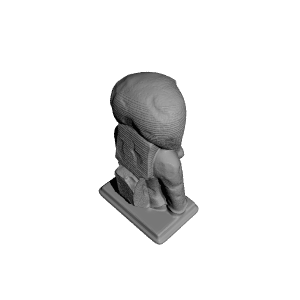 ×
0 collections where you can find Limestone Bust of Queen Ahmes at The British Museum, London by Scan The World