Limestone column capital in the shape of a lotus blossom

3D
Scan The World
3,708 views 166 downloads
3 collections
Community Prints Add your picture
Be the first to share a picture of this printed object
0 comments

Limestone column capital in the shape of a lotus blossom

This is the top, or capital, of a column. It takes the form of a closed lotus blossom. The lotus was one of the two symbolic plants of ancient Egypt. The other was the papyrus, and many column capitals were also carved in the shapes of papyrus plants.

Excavators found the column capital in the enclosure of a temple built by the Pharaoh, Merenptah, who succeeded Ramesses II ('The Great'). Memephis, near modern Cairo in the north of Egypt, was the earliest capital city of Egypt and an important place for kings to build temples. The builders of the temple re-used part of a much earlier temple built in the 5th Dynasty, over a thousand years earlier. This column capital was already an ancient artefact when it as incorporated into the new temple. 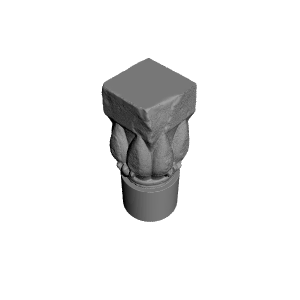