3D
Scan The World
6,486 views 519 downloads
3 collections
Community Prints Add your picture
Be the first to share a picture of this printed object
0 comments

One of three sculptural renditions of Abraham Lincoln (1809–1865) in New York City’s parks, this larger-than-life bronze by Henry Kirke Brown (1814–1886) stands vigil on a busy crossroads at the north end of Union Square Park.

Abraham Lincoln was born in a log cabin in Hardin County (now Larue County), Kentucky, and was mostly self-educated. He settled in New Salem, Illinois, in 1831 and worked as a storekeeper, surveyor, and postmaster while studying law. In 1834, Lincoln was elected to the state legislature and served four terms, and was elected to Congress on the Whig ticket and served from 1847 to 1849. After this single term, he left politics and dedicated himself to a successful legal practice; it was not until the repeal of the Missouri Compromise in 1854 threatened to expand the practice of slavery in the West did Lincoln rejoin the national arena. He lost two bids for the Senate in 1856 and 1858, but made an impression on his state and the nation over the course of seven debates with Democratic opponent Stephen A. Douglas.

Lincoln successfully ran for president as a Republican in 1860. While campaigning, he made his first visit to New York City in February 1860, and delivered a famous speech in Cooper Union’s Great Hall. By Inauguration Day in March 1861, seven southern states had seceded from the Union, and four more would follow in April. As the nation plunged into Civil War, Lincoln proved a skillful and thoughtful leader and orator. In 1863, he issued the Emancipation Proclamation to free the slaves and delivered the Gettysburg Address that eloquently memorialized fallen soldiers.

Lincoln won re-election in 1864 against George McClellan. Five days after Confederate general Robert E. Lee’s surrender on April 9, 1865, Lincoln was assassinated by John Wilkes Booth while attending a play at Ford’s Theater in Washington, DC. He died the next morning. Lincoln’s funeral cortege traveled to all the principal cities in the United States, and arrived in New York City on April 24. His body lay in state at City Hall. Lincoln is buried at Oak Ridge, Illinois, near Springfield.

Not long after Lincoln’s death, the statue of Lincoln was sponsored by the Union League Club, a Republican organization, which retained the services of the noted sculptor Henry Kirke Brown. Though Brown, like many of his generation, made an obligatory visit to Italy to study, he was part of a group of sculptors attempting to establish a truly American sculptural idiom. In his statue of Lincoln, cast in 1868, and dedicated September 16, 1870, he combines a classically styled pose with a perceptive naturalism, uniting realistic detail with an idealistic stance. Brown also created a similar portrait of Lincoln in Prospect Park (1869), and his nephew and pupil Henry Kirke Bush-Brown (1857-1935) crafted the bronze bust for Gettysburg’s Lincoln Memorial.

The sculpture originally stood in the street bed at the southwest corner of Union Square, at the location today occupied by the statue of Mohandas Karamchand Gandhi (1869-1948). In 1875,Abraham Lincoln was protected by the installation of an elaborate stone and bronze rail fence, into which were inscribed from his second inaugural address, “…with malice toward none; charity toward all.” Union Square Park was completely redesigned in 1930 to accommodate new subway construction, and the statue, minus its fence, was relocated to its current position in axial alignment with the Independence Flagpole (1930) and Henry Kirke Brown’s striking equestrian George Washington (1856) located at the park’s southern plaza. Abraham Lincoln was conserved in 1992. 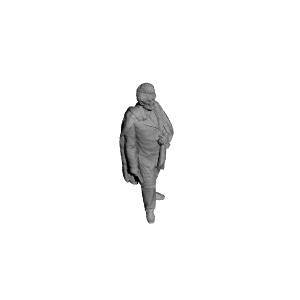 ×
3 collections where you can find Lincoln at Union Square, New York by Scan The World