3D
Featured
4,007 views 286 downloads
Community Prints Add your picture
Be the first to share a picture of this printed object
0 comments

Daniel Chester French was given the job of creating a sculpture of President Abraham Lincoln for the new memorial being built at the west end of the National Mall in Washington, D.C.

This model is his first rough draft design.

French made numerous small changes to his design for the sculpture over the course of several models. But, the final sculpture unmistakably hearkens back to this first rough model from June, 1915.

It is notable for being different from the final sculpture at the memorial in subtle ways.

The left leg is extended out while the right leg reposes backwards under the seat. The position of the legs would be reversed by the final sculpture. There are tassels from a pillow or fringed cloth behind the knees. These were changed to became the American flag being draped over the backrest of the throne in the finished sculpture. The right arm doesn’t naturally bend at the elbow and rest directly on the manchette. Instead it is held out almost straight with only the wrist being in contact with the arm support. In the final sculpture it would be relaxed and the elbow would rest on the manchette like the left. The clenched and relaxed hands are reverse of the final design. While the front of the throne has fasces, they are only very roughly depicted here. The throne has side stretchers. The throne of the final sculpture was simplified on the sides with no side stretchers.

The original model can be seen at Chesterwood Studio in Stockbridge, Massachusetts.

For more information about the Lincoln Memorial sculpture, please see the article at Wikipedia: https://en.wikipedia.org/wiki/Statue_of_Abraham_Lincoln_(Lincoln_Memorial) 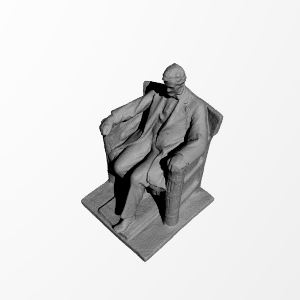