Lion and Serpent at The Louvre, Paris

Lion and Serpent at The Louvre, Paris

An impressive figure of a wild roaring lion pins a serpent to the ground. Head thrown back, jaws wide open, the reptile hisses back defiantly. Owing to the extremely naturalistic rendering of both animals and the violence of the struggle depicted, this sculpture caused a huge controversy. The public and the Romantics acclaimed it. Conservative critics lamented the fact that the Tuileries Gardens, the sculpture's future home, would be turned into a zoo.

Barye sculpted animals in an unprecedented manner. First, they were the actual subject of his sculpture, and not simply accessories. Secondly, his interpretation was based on an exact and faithful analysis of nature. He sought to convey an illusion of fur, lifelike movements, and the untamed character of the animals. The lion has real substance; one can feel the muscles rippling under his pelt. Alongside the painter Delacroix, Barye spent hours on end studying, drawing, and even dissecting animals in the Jardin des Plantes. But the sculptor was no slave to his scientific knowledge: he recreated nature with the means of his art. He was occasionally compelled to exaggerate a muscle, highlight the modeling, and emphasize a line in order to give a true impression of life.

Barye instilled an epic dimension into this fight. He captured the moment when the action seems suspended in time. A dramatic element is added as the two animals size up each other's chances, anticipating the frenetic struggle to follow. Although the lion has the advantage, he remains vigilant, as can be seen from the way he spreads his claws, the position of his tail, and his bristling mane. The tension is at its peak. The snake, whose coiled head is thrown back, jaws wide open, is ready to strike at the lion's face. The lion's concentrated energy is set to respond: with puckered muzzle, furious eye, and forepaw forcefully pinning the reptile to the ground, his body is pure muscle. Both animals possess the power of life and death, which could not fail to fascinate the Romantics. The size of the sculpture heightens its impact.

The lion is the supreme example of a monarchic animal, a symbol of force and courage. This sculpture is thus also a tribute to the July Monarchy and King Louis-Philippe, at a time when there was widespread discontent with the regime established after the July Revolution (1830). The king's accession to the throne had taken place under the constellations of Leo (the lion) and Hydra (the sea serpent). The sculpture therefore symbolized celestial approval of this political change. 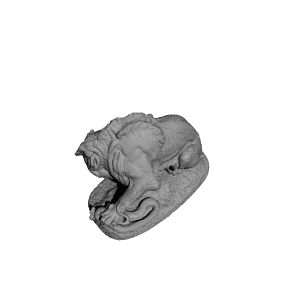 ×
7 collections where you can find Lion and Serpent at The Louvre, Paris by Scan The World
×
Dustin Phillips
@JAT.MN
1
Posted at: 05th December 2022

This seriously came out better than I expected. 0% Infill.. 4 Perimeters Printed with a cheap generic brand of PLA I can never recommend.