Both the lion itself and the lily on the shield are symbols of Florence, the red lily on the white ground being the emblem of the Guelph party. The origin of the term "Marzocco" is obscure, but it has been suggested that it derives from Mars (Marte), the pagan protector of Florence. It is conjectured that when the statue of Mars was swept from the Ponte Vecchio in the flood of 1333, it was replaced by a lion called Martocus, or the little Mars. The Marzocco originally decorated the staircase in the apartments in S. Maria Novello which were built for the visit of Pope Martin V in 1419-20. The lion was removed from this position when the staircase was demolished, possibly as early as 1515. During the restoration of the Palazzo Vecchio in 1812, Donatello's Marzocco was used to replace another earlier image of the Marzocco outside the Palazzo Vecchio. In 1885, Donatello's lion was transferred to the Museo Nazionale, and replaced by a copy. 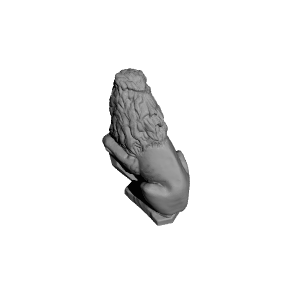