3D
Scan The World
2,253 views 104 downloads
2 collections
Community Prints Add your picture
Be the first to share a picture of this printed object
0 comments

The Lion of al-Lāt (اللات) was an ancient statue of a lion holding a crouching gazelle which adorned the temple of pre-Islamic goddess al-Lāt in Palmyra, Syria. The statue was made from limestone ashlars in the early 1st century AD and measured 3.5 m (11 ft) in height, weighing 15 tonnes. The lion was regarded as the consort of Al-lāt. The gazelle symbolized Al-lāt's tender and loving traits, as bloodshed was not permitted under penalty of Al-lāt's retaliation. The lion's left paw had a partially damaged Palmyrene inscription which read: tbrk ʾ[lt] (Al-lāt will bless) mn dy lʾyšd (whoever will not shed) dm ʿl ḥgbʾ (blood in the sanctuary). On 27. June 2015 the statue was demolished by the Islamic State of Iraq and the Levant after it had captured Palmyra.

The statue was discovered in 1977 by a group of Polish archeologists working under Dr. Michał Gawlikowski. It was found in pieces, reused already in antiquity for the temple's foundation. Subsequently, it was decided to reassemble the pieces in front of the entrance to the Palmyra Museum. The task was undertaken by restorer Józef Gazy. In 2005, the statue underwent restoration to eliminate problems from assemblage. Ultimately, the statue was restored in imitation of its original intended appearance – a relief jumping out from a wall. During the Syrian Civil War the statue was shielded with a metal plate and sandbags to protect it from fighting. 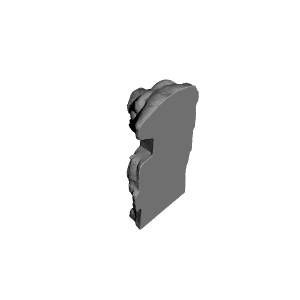