3D
Scan The World
2,777 views 123 downloads
Community Prints Add your picture
Be the first to share a picture of this printed object
0 comments

A natural rock outcrop Know as Los Sapos (the toads, or the frogs) is located on the grounds of the
Hacienda San Lucas, directly South of the Copan Acropolis between the eastern and westernmost stelae that define the edges of the Copan valley.

Freestanding toad sculptures were popular in rural areas around the valley, and it is thought that they were part of an early folk religion or fertility cult that flourished into the Late Classic period. The largest known toad sculpture is at Los Sapos, today locally called "the King Toad." It is carved into the natural rock outcrop along with other animals and a sculpture that seems to depict a person in the act of bloodletting by penis perforation. 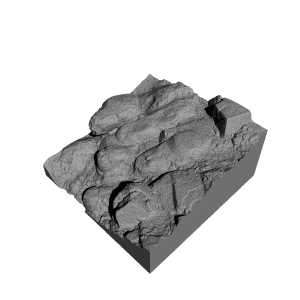