3D
3,525 views 87 downloads
1 collection
Community Prints Add your picture
Be the first to share a picture of this printed object
0 comments

It is unlikely that Buzz Aldrin was thinking about photogrammerty when he stood on the Moon on July 20th, 1969.  But by shooting two photos of his own bootprint from slightly different camera positions he inadvertantly made the first extraterrestrial photogrammerty capture.

This model is not the first to be made from these photos.  There are a number out there that focus on the bootprint.  Most are heavily retouched and sculpted to make a pleasing print.  I decided to aim for accuracy and authenticity instead.  This model reproduces all of the lunar surface captured in the photos including the bootprint.  Starting with high resolution tifs from NASA I created the model with Agisoft PhotoScan.  The only processing I did beyond that was to make the scan printable.  It consisted of filling the holes and solidifiying the model.  You will notice the fill in the heel of the boot print and the far side of the small rock, which were in deep shadow and therefore provided no data.  The model is designed to print vertically so it will reproduce the most detail possible.  Now Scan the World can expand to the Moon! 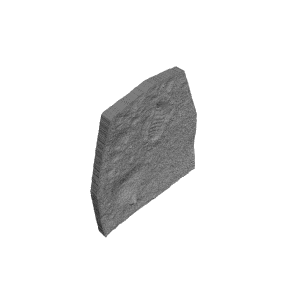