3D
5,704 views 225 downloads
8 collections
Community Prints Add your picture
Be the first to share a picture of this printed object
0 comments

M42 is the "universal" screw thread mount for SLRs that is usually associated with Praktica and Pentax. It was actually used by many brands, including Fujica, Mamiya/Sekor, and Zenit. Because it is an open standard and has a relatively long flange distance, it has also been a very popular mount for adapting to other mounts (notably excluding Nikon F). There are many commercial adapters for M42 lenses to other mounts, including Leica M.

Ok, so why 3D print this one? Because we can seems like a decent answer -- this is an easy print in 1 piece, including the M42 screw thread. However, there are two even better reasons. The first is that an M42 to M adapter allows the latest Sony E mount bodies to autofocus these manual lenses via the Techart Pro LM-EA7 adapter... which has a 700g weight drive limit, so we don't want to waste weight on a heavy adapter. The second is that later Mamiya/Sekor M42 lenses had the aperture ring extend back around the mount flange, but commercial adapters have overly wide flanges that prevent those lenses from mounting. Actually, there is also a third potential issue in that some M42 adapters are too thick on the M side to fit on the LM-EA7. In any case, this adapter avoids all these problems.

The last two shots were taken using the LM-EA7 autofocus with the manual Mamiya/Sekor 55mm f/1.8 lens shown. Note that you can shift the autofocus range closer by not leaving the manual focus ring set to infinity.

A very straightforward print. I used "dishwasher safe" high-temp black PLA. It should be a little tight, so work a lens in the mount a bit before attaching to a camera -- that way, you can clean any little shards that the flange might cut the first time you fit a lens to it.

Note that the M42 thread prints directly and shouldn't need any post processing. A little detail with M42 is that many adapters don't have the thread stop the lens at the right rotational position... this one should -- at least it does with the lenses I've tested.

Be a little careful starting threading a lens on because the metal thread on the lens can damage the printed thread if you cross thread it.

This adapter does NOT have a ledge to depress the stop-down pin found in the back of most M42 lenses. Thus, the lens must be set to operate in MANual, not AUTOmatic, aperture mode. See http://www.instructables.com/id/M42-Lens-Aperture-Control-on-Modern-DSLRs/ for details. 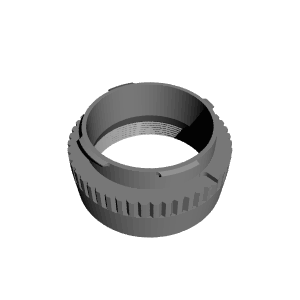