Madonna and Child with Angels

3D
Scan The World
2,672 views 208 downloads
1 collection
Community Prints Add your picture
Be the first to share a picture of this printed object
0 comments

Madonna and Child with Angels

This relief of a Madonna and Child resembles a reredos – a large altarpiece or decoration placed behind the altar in a church – because of its architectural elements which gives it an impressive and almost monumental stature. The facade evokes Greek and Roman temples with the engraved entablature and cornice. The tympanum bears a medallion representing Jesus with his right hand raised in the position of blessing.

The centre panel represents the recurrent subject of the Madonna and child with angels. The technique of the stiacciato used by Di Duccio is typical of the Renaissance and enables the sculptor to give more depth and perspective to the bas-relief. For instance, here the spectator may distinguish the foreground with the Virgin and her baby, from the back ground where an angel's head is slightly perceptible. The relief is more or less important depending on how close the subject is supposed to be to the spectator. Finally, the centre panel is framed by two angels who are themselves out of the architectural structure. 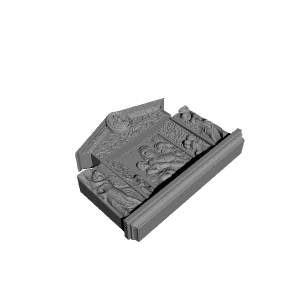