Madonna and the Child

3D
Scan The World
1,992 views 120 downloads
Community Prints Add your picture
Be the first to share a picture of this printed object
0 comments

Madonna and the Child

This is a cast of marble original relief depicting Madonna and the Child. The relief was placed at the altar of Saint Bartholomew.

The Madonna and Child type is very prevalent in Christian iconography, divided into many traditional subtypes especially in Eastern Orthodox iconography, often known after the location of a notable icon of the type, such as the Theotokos of Vladimir, Agiosoritissa, Blachernitissa, etc., or descriptive of the depicted posture, as in Hodegetria, Eleusa, etc.

The term Madonna in the sense of "picture or statue of the Virgin Mary" enters English usage in the 17th century, primarily in reference to works of the Italian Renaissance. In an Eastern Orthodox context, such images are typically known as Theotokos. "Madonna" may be generally used of representations of Mary, with or without the infant Jesus, is the focus and central figure of the image, possibly flanked or surrounded by angels or saints. 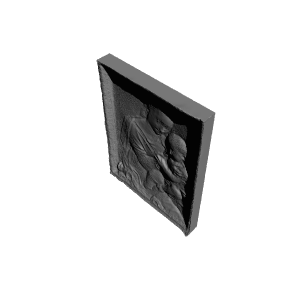