Madonna from the Franciscan Monastery

3D
Scan The World
2,200 views 174 downloads
1 collection
Community Prints Add your picture
Be the first to share a picture of this printed object
0 comments

Madonna from the Franciscan Monastery

This sculpture depicts Virgin Mary holding Christ in her arms. The Madonna origins in the Franciscan monastery in Pilsen where it was allegedly a part of the decoration of then recently completed monastery church (with a vault from around 1350). It is the oldest preserved sculpture from Plzen. The author based his work on that of the Master of Madonna of Michle, certain details reveal close links to the Madonna of Velke Mezirici, some features bring it closer to the Madonna of Zinkovy and the Madonna of Touzim. Nevertheless, it stands somewhat aside from the main steam and formally it displays some historicizing elements. Christ holds the Sphere in his hand - the symbol of His Heavenly Reign (Pantocrator); the Virgin Mary, not crowned yet, held most likely an apple in her hand - the symbol of the sin, anticipating that Mary, the "new" Eve, shares the redemption of the "old" Eve's sin. 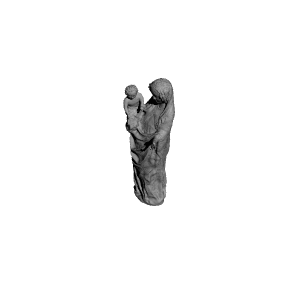