3D
Scan The World
1,684 views 66 downloads
Community Prints Add your picture
Be the first to share a picture of this printed object
0 comments

Tombstone can be found in necropolis of the XVIII century. Maguire Gustav Adolf was born in Bavaria, doctor of Medicine and Surgery. He Arrived in Russia in 1832 was in the service at the court of Duke Maximilian Leuchtenberg.

The sculpture was made in 1840s by S. Lemolt (an anonymous sculptor). But we can find two signatures on the overcoat, 2 Signed: on foot and along the bottom edge:   Chev LeMolt and S. Lemolt, we still don't know who carved this tombstone.

The figure of a man in a frock coat and overcoat, lying, leaning on his left hand, on a pedestal, processed in the form of lumps, with the inscription carved out on the northern side:   La nous serons reunis / Adolphe Mahir / ne le 17 mars 1807 / Decedele 4 aut 1842, which means in english "Here we will be together, Adolphe Maguire, born in 1807 and dead in 1842".   Bronze sculpture with tombstones A. Maguire was moved in the 1930s. the museum necropolis. In 2004, a copy is made of granite pedestal, which has remained at the grave of A. Maguire at the Smolensk Lutheran cemetery. 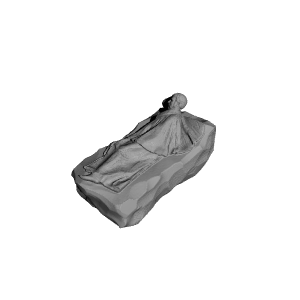