3D
360°
Scan The World
1,234 views 31 downloads
Community Prints Add your picture
Be the first to share a picture of this printed object
0 comments

This is a carved wooden Malangan Figurine from the island of New Ireland (Papua New Guinea) from the ethnological collection of the University of Tübingen.

Malangan is a cycle of rituals of the people of the north coast of New Ireland. Malangan express many complex religious and philosophical ideas. They are principally concerned with honoring and dismissing the dead, but they also act as affirmation of the identity of clan groups, and negotiate the transmission of rights to land. ​Malangan sculptures were made to be used on a single occasion and then destroyed. They are symbolic of many important subjects, including identity, kinship, gender, death, and the spirit world. ​They often include representations of fish and birds of identifiable species, alluding both to specific myths and the animal's natural characteristics. For example, at the base of this figure is depicted a rock cod, a species which as it grows older changes gender from male to female. The rock cod features in an important myth of the founding of the first social group, or clan, in this area; thus the figure also alludes to the identity of that clan group. 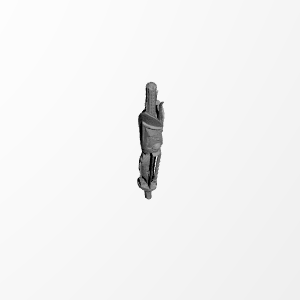 ×
0 collections where you can find Malangan Figurine by unimuseumt