3D
Scan The World
9,992 views 1,518 downloads
12 collections
Community Prints Add your picture
Be the first to share a picture of this printed object
0 comments

The steppe mammoth (Mammuthus trogontherii or Mammuthus armeniacus) is an extinct species of Elephantidae that ranged over most of northern Eurasia during the Middle Pleistocene, 600,000-370,000 years ago. It probably evolved in Siberia during the early Pleistocene from Mammuthus meridionalis. It was the first stage in the evolution of the steppe and tundra elephants and an ancestor of the woolly mammoth of later glacial periods. This particular skull was discovered in Ilford, Essex (it’s known as the Ilford mammoth), and is the only complete mammoth skull ever found in Britain. 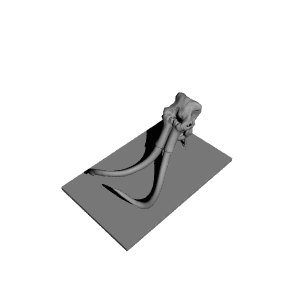 ×
12 collections where you can find Mammoth Cranium at The Natural History Museum, London by NaturalHistoryMuseum