Man of Roman Egypt at The British Museum, London

3D
Scan The World
2,070 views 110 downloads
Community Prints Add your picture
Be the first to share a picture of this printed object
0 comments

Man of Roman Egypt at The British Museum, London

This is a Mummy portrait of a young man from Hawara, Egypt. His face was reconstructed using a skull found at the site of the excavation.

Egypt was one of the most ancient cultures to come under Roman control. Its long history was reflected in its mixed population, including Egyptians, Libyans, Nubians, and Greeks.

Egypt's dry climate has preserved many objects that have not survived elsewhere. Buried towns, graves and rubbish dumps have produced a wide range of finds that give amazing insight into the daily life of ordinary people in Roman Egypt.

There are papyrus documents recording legal disputes over land and property, personal letters on family affairs, and records of births, marriages and deaths. From these documents we know that Egyptian society under the Romans was complex and cosmopolitan.

In Roman Egypt, people continued the ancient Egyptian tradition of preserving the dead. Lifelike portraits, painted on panels of wood, were sometimes placed over the faces of mummies. Scientists have recreated some of these faces from the skulls found beneath the portraits, allowing us to look at the real people who lived in Roman Egypt. Sometimes these match the portraits extremely well, as seen in this case. 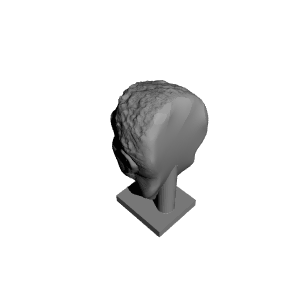 ×
0 collections where you can find Man of Roman Egypt at The British Museum, London by Scan The World