Mantorso at the Middelheim Museum

3D
Scan The World
2,768 views 85 downloads
Community Prints Add your picture
Be the first to share a picture of this printed object
0 comments

Mantorso at the Middelheim Museum

George (Georges) Minne (born Georgius Joannes Leonardus Minne; 30 August 1866 – 18 February 1941) was a Belgian artist and sculptor famous for his idealized depictions of man's inner spiritual conflicts. A contemporary of Gustav Klimt and Egon Schiele, Minne's work shows many similarities in both form and subject matter to the VienneseSecessionists, the fathers of Art Nouveau.He was born in Ghent, Belgium as the son of an architect (Fredericus Augustus Minne). In 1879, Minne studied painting at the Royal Academy of Fine Arts in Ghent, then in the Académie Royale des Beaux-Arts in Brussels from 1885 through 1889. In 1891 he was elected a member of the arts group Les XX. He had made his first visit to Paris in 1886 where he met the writers Maurice Maeterlinck and Gregore Le Roy, who introduced him to theFrench Symbolists. Minne returned to Paris in 1890 and asked Auguste Rodin for permission to work in his studio, Rodin told him, "I have nothing to teach you."In 1892, Minne married Josephine Destanberg, the daughter of a Ghent poet. He then spent most of his time drawing and sculpting. He established his own bronze foundry in 1910-14, in Ghent, which was managed by his son. During World War I he fled to Wales, but returned after the war, and taught drawing.

His most famous works are the "Kneeling Youth" series of sculptures, including "The Fountain of Kneeling Youths", a bronze-cast fountain in his home town of Ghent (the Marble originals are at the Folkwang Museum inEssen, Germany), as well as various smaller sculptures in private and museum holdings, such as the pair of "Kneeling Youths" at the Neue Galerie in New York City and the plaster of "Kneeling Youth" (1898) acquired in 2011 by the National Gallery of Victoria, Melbourne. The Neue Galerie's "Kneeling Youth" sculptures were previously owned byAdele Bloch-Bauer and her husband Ferdinand Bloch-Bauer, a wealthy industrialist. The sculptures were confiscated by the Nazis, and only through extensive restitution efforts were they returned to Bloch-Bauer's niece Maria Altmann, and eventually acquired by the museum.For the Basilica of Koekelberg Minne made the sculpture of the Sacred Heart for the altar in the apse. He also made the bronze calvarie at the outside of the basilica.For his achievements he was made a baron on 25 April 1931.

Easy to print, only needs support on nose 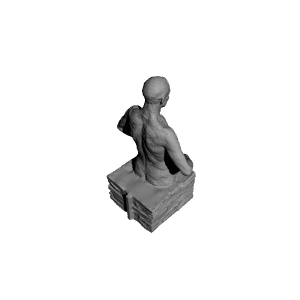