3D
Scan The World
2,947 views 124 downloads
1 collection
Community Prints Add your picture
Be the first to share a picture of this printed object
0 comments

Constructed around a sinuous line, her contrapposto incomplete, Meditation originated in a figure on the tympanum of The Gates of Hell, inspired by Michelangelo. She was then reworked into the Monument to Victor Hugo, before being enlarged under the name The Inner Voice. She represented one of the muses who inspired the poet. In order to include her in the monument, Rodin had to remove her arms and amputate part of her legs. Outside of this context, the figure was exhibited in the same state in Dresden and Stockholm in 1897, but because of its unfinished appearance, the public found it hard to understand.

Rodin, however, was extremely fond of this work, which Rilke described as follows: “The arms are surprisingly absent. Rodin felt them in this instance… to be something extraneous to the body which sought to envelop itself without any external aid… The same is true of Rodin’s armless statues; nothing vital is missing. One stands before them as if before a completed whole that brooks no complement,” (Rilke, 1928). 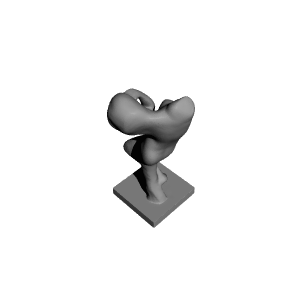