This is the reproduction of a bronze dated from the 15th century.

The stylized features of the face and the general proportions are characteristic of the art of Sukhothai, a school of sculpture that had developed around this capital between the 13th and 15th centuries.

Among the hallowed images in the Thai iconography of the Buddha, this is probably the most classical. The canonical attitude shows the Blessed One meditating at the ultimate moment of his path towards right living, when he calls upon the Earth to bear witness to his victory, expressed by a slight gesture of his right hand. The "Awakened One" becomes the Buddha at that precise moment, after having triumphed over the attacks of Mara (Death and Evil): the Maravijaya.

In Buddhism, Mara is the supreme incarnation of the tempter, the god who reigns over the world of desire. When he felt that his authority over this world was threatened by the Buddha as he was getting ready to discover the way to salvation, he made him go through several trials. After an attack by devils and an intervention by Mara himself, the Buddha came out of these struggles victorious. 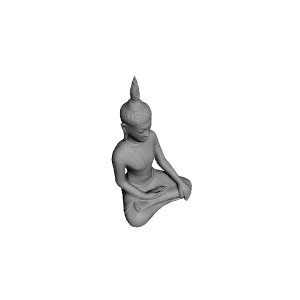 ×
7 collections where you can find Maravijaa Buddha at The Guimet Museum, Paris by Scan The World
×
Philippe Barreaud
@philippeb66
1
Printed on: Sindoh 3DWOX 1
Material: PLA
Posted at: 25th September 2022