Marble Head of a Goddess at The Metropolitan Museum of Art, New York

3D
Scan The World
2,832 views 108 downloads
Community Prints Add your picture
Be the first to share a picture of this printed object
0 comments

Marble Head of a Goddess at The Metropolitan Museum of Art, New York

In antiquity, heads were often carved separately from the statues for which they were intended. The head was made with a convex tenon that could be set into a specially prepared cavity in the statue. The juncture was concealed by a line of drapery. This finely carved head of a young woman must represent a goddess because of its colossal size. Persephone (the daughter of Demeter and wife of Hades, the god of the underworld) and Hygeia (the daughter of Asklepios, the god of medicine) were often represented with hair separated into thick coils pulled back to the top of the head and tied loosely in a knot. Such a knot was probably affixed to this head using three large holes that remain in the back. 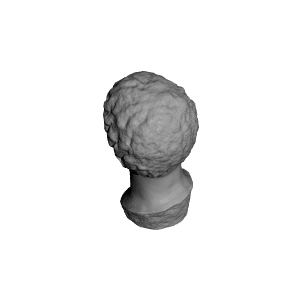