Marble Head of a Man at The Metropolitan Museum of Art, New York

3D
Scan The World
2,848 views 118 downloads
Community Prints Add your picture
Be the first to share a picture of this printed object
0 comments

Marble Head of a Man at The Metropolitan Museum of Art, New York

During the first century B.C., many men throughout the Mediterranean world chose to be presented in an uncompromisingly realistic manner that accentuate their individual features and the effects of age. This style of portraiture accorded especially well with the austere values of the Roman Republic, which lasted from the fifth century until the late first century B.C. The traditional Roman concept of virtue called for old-fashioned morality, a serious, responsible public bearing, and courageous endurance in the field of battle. Prestige came as a result of age, experience, and competition among equals within the established political system. These are the values embodied in this portrait, with its carefully observed bony structure, intense frown, deeply etched wrinkles, and tight-lipped mouth. 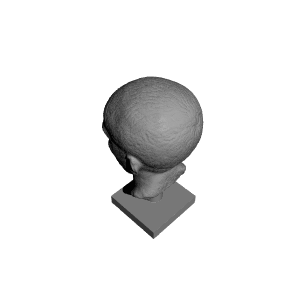