3D
Scan The World
1,218 views 36 downloads
Community Prints Add your picture
Be the first to share a picture of this printed object
0 comments

The dynamic movement and passionate expression of this colossal head mark it as a rare example of monumental art from the late third to the second century B.C., when an exaggerated baroque style prevailed in some areas of the Mediterranean. The goddess originally wore a helmet of marble or bronze, added separately. The ears are pierced for metal earrings. The head comes from an over-life-sized statue that possibly represented the goddess striding forward. The statue may have stood outdoors, as a monumental votive image of the warrior goddess in her role as protectress of a city rather than within a temple as a cult statue. 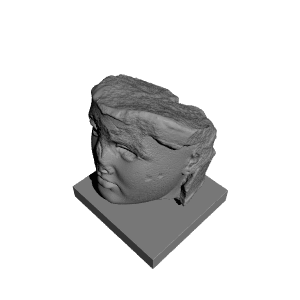