Marble Head of Demosthenes at The Metropolitan Museum of Art, New York

3D
Scan The World
2,761 views 123 downloads
Community Prints Add your picture
Be the first to share a picture of this printed object
0 comments

Marble Head of Demosthenes at The Metropolitan Museum of Art, New York

Demosthenes (ca. 384-322 B.C.) of Athens is widely considered the greatest orator of ancient Greece. Early on in his career, he recognized that the rise in power of Philip II of Macedonia was a threat to Greek independence, and he initiated a lifelong aggressive anti-Macedonian policy, which he pleaded publicly to the Athenians and the citizens of other Greek city-states. More than fifty Roman portraits of Demosthenes are known, an eloquent testimony to his continued popularity in ROman times. All the existing portraits appear to reflect a single Greek original, most likely the posthumous portrait statue by the sculptor Polyeuktos erected in the agora (marketplace) of Athens in 280 B.C. The fine head captures the orator in a characteristically harsh, unhappy yet determined expression - the countenance of a noble fanatic, greak mind, and passionate patriot.

(source; accompanying text at The Metropolitan Museum of Art) 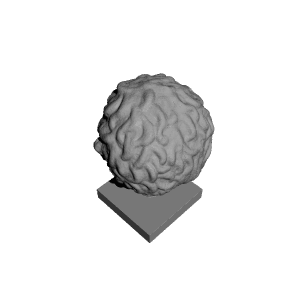