Marble Head of Epikourus at The Metropolitan Museum of Art, New York

3D
Scan The World
2,334 views 140 downloads
Community Prints Add your picture
Be the first to share a picture of this printed object
0 comments

Marble Head of Epikourus at The Metropolitan Museum of Art, New York

Born on the island of Samos in 341 B.C., Epikouros spent most of his life in Athens, where he founded the Kepos (Garden), one of the most influential philosophical school of the Hellenistic age, and where he lived until his death in 271 B.C. Epikouros must have been honored by a portrait statue made late in his lifetime or soon after his death. The esteem in which his teachings were held is shown by the numerous Roman copies, including a bust and a herm still bearing the inscriptions identifying him, that reproduce the same original. From other copies, we know that the original statue, which was probably first set up in the Kepos to honor Epikouros, represented him seated calmly and classically composed on an elaborate chair.

(source; accompanying text from the Metropolitan Museum of Art) 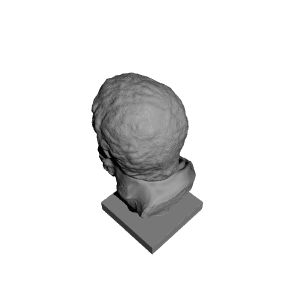