Depicted with the so-called helmfrisur, a hairstyle fashionable throughout the Severan period, the woman's center-parted, undulating locks cascade over her ears, with wisps escaping from underneath the coiffure to indicate that she is wearing a wig. Although the back of her head is now missing, it can be assumed from other portraits that her hair would have been bound in a flat chignon. The portrait's frontal gaze no longer has the whimsical and mournful appearance of works associated with the Antonine period; rather the hairstyle, accentuated by the round face and lidded almond-shaped eyes, can be seen on portraits of Julia Domna, second wife of Septimius Severus (193-211 A.D.). See no. 42 in D.E.E. Kleiner and S.B. Matheson, eds., I Claudia, Women in Ancient Rome, for a comparable portrait.

This head once formed part of the collection of Dr. Frank Stanton (1906-2006), an American broadcasting executive who served as the president of CBS between 1946 and 1971. 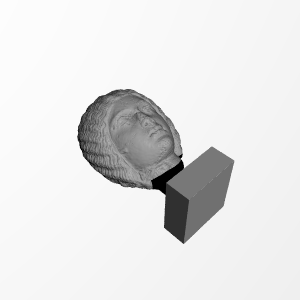