3D
360°
Featured Scan The World
1,942 views 130 downloads
Community Prints Add your picture
Be the first to share a picture of this printed object
0 comments

The relief, which originally formed the front panel of a large sarcophagus, depicts the death of the Greek hero Meleager, famous for killing the Calydonian boar. On other Roman sarcophagi this scene accompanies that of the hunt itself, showing Meleager spearing the ferocious boar. However, here the focus is on the dying hero who is being carried home surrounded by his grieving father and companions. During the Renaissance the scene became the prototype for artistic representations of the Deposition of Christ. The panel, as it now survives, includes 16th-century restorations. 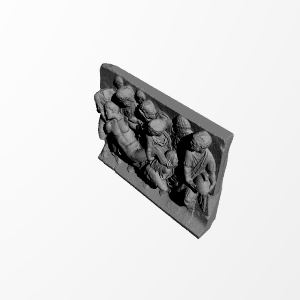