Marble Statue of Demeter at The British Museum, London

3D
Scan The World
2,670 views 85 downloads
Community Prints Add your picture
Be the first to share a picture of this printed object
0 comments

Marble Statue of Demeter at The British Museum, London

Demeter is shown seated on a throne. The lower arms are lost, together with the hands, at least one of which probably held a libation bowl or torch. The head was carved separately from the body. The goddess is portrayed as a paradigm of Greek womanhood, serene, mature, motherly and modestly veiled. A statue of her daughter Persephone (now lost) was perhaps shown standing beside her. The sculpture was found in the sanctuary of Demeter at Knidos. 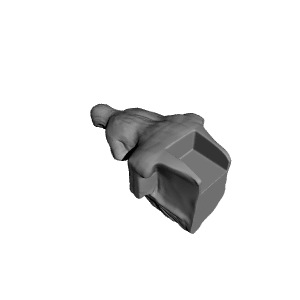 ×
0 collections where you can find Marble Statue of Demeter at The British Museum, London by Scan The World