This marble vase with handles in the form of entwined serpents is arguably the finest and best preserved example known today of a type of Roman vessel with a strigilated pattern carved on the body. These elongated S-shaped channels were a popular form of relief decoration on vases and sarcophagi, especially in the second half of the second century and the third century a.d. Two bearded snakes form the handle on either side of the vase. With their upper bodies coiled on the broad shoulder, they stretch their flat heads forward across the deep concavity of the neck to bite the projecting rim, setting up a play of spatial depth and light and dark effects. The motif of entwined serpents is appropriate for a funerary vase. Linked with the earth, snakes were associated with chthonian powers, and the Greeks and Romans regarded them as guardians of sacred places, houses, and tombs. In the absence of a funerary inscription, however, it is not possible to determine whether this vase was originally intended as an ash urn or for purely decorative use.

The foot is restored. 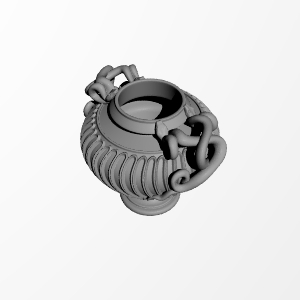 ×
8 collections where you can find Marble strigilated vase with snake handles by MacaulayHonorsCollege
×
void null
@konqi
1
Posted at: 12th July 2019

Printed a mini with a fast profile and not using supports