3D
Scan The World
1,554 views 65 downloads
Community Prints Add your picture
Be the first to share a picture of this printed object
0 comments

Marcus Vipsanius Agrippa (born 63 BC?—died March, 12 BC, Campania [Italy]) was a powerful deputy of Augustus, the first Roman emperor. He was chiefly responsible for the victory over Mark Antony at the Battle of Actium in 31 BC, and during Augustus’ reign he suppressed rebellions, founded colonies, and administered various parts of the Roman Empire. Of modest birth but not a modest man, Agrippa was disliked by the Roman aristocracy. In his own interest he scrupulously maintained a subordinate role in relation to Augustus, but he felt himself inferior to no one else.

This object is part of "Scan The World". Scan the World is a non-profit initiative introduced by MyMiniFactory, through which we are creating a digital archive of fully 3D printable sculptures, artworks and landmarks from across the globe for the public to access for free. Scan the World is an open source, community effort if you have interesting items around you and would like to contribute, email stw@myminifactory.com to find out how you can help 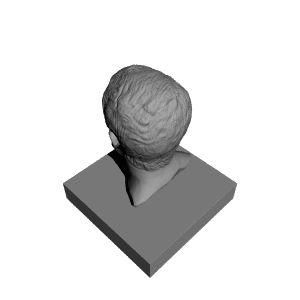