3D
Scan The World
2,804 views 92 downloads
Community Prints Add your picture
Be the first to share a picture of this printed object
0 comments

This large stone sculpture by Karel Aubroeck, standing outside of the AZ Nikolaas, depicts the Mary Mediatrix. The title of this sculpture refers to the former name of the Catholic Mary Mediatrix Hospital, which is now part of AZ Nikolaas. It was created by artist Karel Aubroeck in 1932; as a front-line soldier he met the horrors of the Great War (1914-1918). As an artist, Aubroeck was a sensitive sculpture, but also a passionate idealised and with this combination has created a distinctive expressionist style.

In Catholic faith, the title Mediaxtrix refers to the intercessory role of the Blessed Virgin Mary as a mediator in the salvific redeption by Jesus, and that he bestows graces through her. Mediatrix is an ancient title that has been used by a number of saints since at least the 5th century. It is the encompassing belief that all graces and blessings come through her from her son.

With this in mind in regards to Aubroeck's sculpture, the artist shows the two in a stylized manner. Rather than a human version, the sculpture depicts a robust woman who, despite the beaten down eyes, her presence is aware in the world. The folds of her dress and dignified posture grant it the status of a classical goddess. The child is not softened in her arms but is triumphant, muscular and powerful on her shoulder.

Aubroeck is one of the most important Flemish sculptors of the 20th century. Training at the Academy of Temse and afterwards training as a woodcarver in Mechelen. He worked mainly in an expressionistic style, characterized by a closed style.

A very nice print that requires supports. You might want to scale it up for more detail. 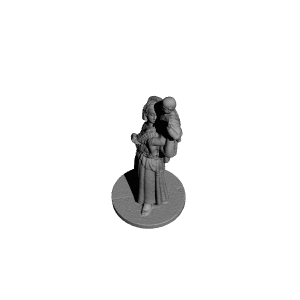 ×
0 collections where you can find Maria Mediatrix in Sint-Niklaas, Belgium by Scan The World