Marli and Marion at The British Museum, London

3D
Scan The World
2,328 views 73 downloads
Community Prints Add your picture
Be the first to share a picture of this printed object
0 comments

Marli and Marion at The British Museum, London

Inscription - 'Marli, daughter of Elahbel, son of Maki (between the heads). Marion, son of Elahbel (to the right of right-hand head)'

Limestone bust from a Palmyrene funerary relief; carved; two women, veiled and wearing robes, each raising the outside hand to the veil's edge by the neck and with one other hand folded across body; one has a double chain with a lunate pendant and an oval palte on a chain; inscription; 4 ll; hands folded across bodies are incomplete and badly chipped; face of right figure badly worn and incomplete. 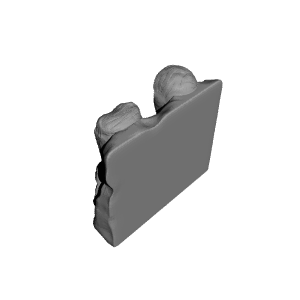 ×
0 collections where you can find Marli and Marion at The British Museum, London by Scan The World