Meleager kills a boar at the Louvre museum, Paris

3D
Scan The World
4,952 views 449 downloads
3 collections
Community Prints Add your picture
Be the first to share a picture of this printed object
0 comments

Meleager kills a boar at the Louvre museum, Paris

Meleager joined the Argonauts hunters and sailed with them from Hellas to Colchis in Caucasus in order to fetch the Golden Fleece. At their return, many of those participated in what became known as the Calydonian Boar Hunt. This hunt took place because because Meleager's father, King Oeneus 2 of Calydon, while sacrificing the first fruits of the annual crops of the country to all the gods, had forgotten Artemis. To punish his negligence, the goddess sent a boar of extraordinary size and strength that prevented the land from being sown, and destroyed both cattle and people. To get rid of the nuisance, King Oeneus 2 assembled the noblest men of Hellas—today known as the Calydonian hunters—promising to give the Boar's skin as a prize to him who should kill the beast.

Led by Meleager, they hunted the boar, which was shot first by Atalanta. After her, Amphiaraus shot it in the eye, and then Meleager finished it by a stab in the flank. However, on receiving the skin as prize, Meleager, being in love with Atalanta, gave it to the huntress. But the sons of Thestius 1 who took part in the hunt representing the Curetes—an Aetolian people—did not approve of Meleager's gallant gesture because, in their view, a woman should not get a prize in the face of men. So, they reasoned, if Meleager did not take the skin, it belonged to them by right of birth. Meleager, however, was not in a disposition of accepting instructions regarding what he should do with the prize he had won, and in the course of the dispute that ensued he slew the sons of Thestius 1, giving the skin to Atalanta. 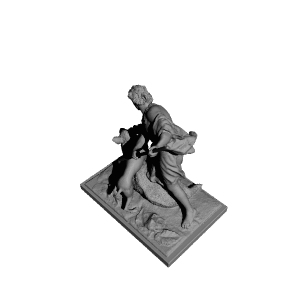 ×
3 collections where you can find Meleager kills a boar at the Louvre museum, Paris by Scan The World