3D
360°
Scan The World
2,050 views 99 downloads
1 collection
Community Prints Add your picture
Be the first to share a picture of this printed object
0 comments

This relief depicts the story of Mercury (Hermés) and Argus.

Argus was Hera's servant and his main task was to guard the white cow Io, keeping her chained to the sacred olive tree at the Argive Heraion. Io, originally a beautiful girl and Hera's priestess, was seduced by Zeus in cloud form and Hera changed her into a cow for it. To free Io, Zeus had Argus slain by Hermes. The messenger of the Olympian gods, disguised as a shepherd, first put all of Argus' eyes asleep with spoken charms, then killed him by hitting him with a stone.

The sacrifice of Argus liberated Io and allowed her to wander the earth, although tormented by a gadfly sent by Hera, until she reached the Ionian Sea, named after her, from where she swam to Egypt and gave birth to a love child of Zeus, according to some versions of the myth. Other interpretations say she changed back to human form, married king Telegonus and got worshipped as goddess Isis after her death. 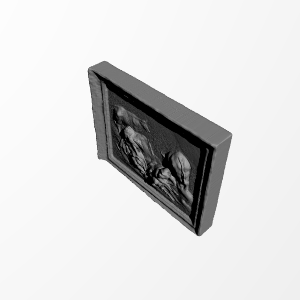