3D
Scan The World
4,176 views 188 downloads
4 collections
Community Prints Add your picture
Be the first to share a picture of this printed object
0 comments

The original statue was by William Robert Colton and was installed c1867. The current statue is a copy dating from c1975 and is made from concrete. The statue is now known as, and shown on the park maps, as the "Little Nell" statue.The statue shows a bare breasted, young girl in a standing position wearing a long skirt. Her hands are placed on her hips and a fish is wrapped around her back supported by her fore arms/ wrists. The fish's head faces the front on her left side and its tail is on her right side. Her hair hangs down over her right shoulder. Around her hips is a large tray, about 1.5m in diameter, that must have been the base of the fountain on the original piece. 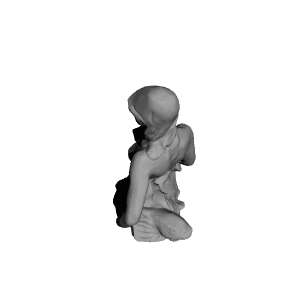 ×
4 collections where you can find Mermaid at Hyde park, London by Scan The World