Bust of Solid Snake from Metal Gear Solid 4: Guns Of The Patriots

3D
11,472 views 473 downloads
3 collections
Community Prints Add your picture
Be the first to share a picture of this printed object
3 comments

Bust of Solid Snake from Metal Gear Solid 4: Guns Of The Patriots

Solid Snake is a fictional character and one of the main protagonists of Konami's Metal Gear series created by Hideo Kojima. During his debut appearances, Solid Snake's visual appearances were references to popular actors, and he was given his own consistent design in Metal Gear Solid. Such design shows him as a brown-haired adult wearing a dark "sneaking suit", as well as a bandanna. This appearance has remained mostly consistent throughout subsequent installments, with minor changes due to Snake's advancing age. During the beginning of the Plant Chapter in Metal Gear Solid 2: Sons of Liberty, he disguises himself by wearing a Navy SEAL uniform. By Metal Gear Solid 4: Guns of the Patriots, he has undergone a notable, drastic change as a result of his accelerated aging making him look near-elderly. Nevertheless, he still wears his sneaking suit for missions and has access to different disguises to make him look like other characters, as well as his younger self.

Metal Gear Solid follows Solid Snake, a soldier who infiltrates a nuclear weapons facility to neutralize the terrorist threat from FOXHOUND, a renegade Special Forces unit. Snake must liberate two hostages, the head of DARPA and the president of a major arms manufacturer, confront the terrorists, and stop them from launching a nuclear strike. Cinematic cut scenes were rendered using the in-game engine and graphics, and voice acting was used throughout the entire game.

For this project I've started with 3ds max for the base mesh and I exported the OBJ file in Zbrush to add secondary forms and details.

Here a brief description of my process:

After completing these steps I usually export the STL file in netfabb to test and scale. 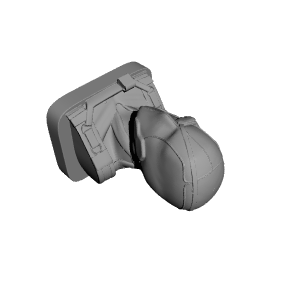 ×
3 collections where you can find Bust of Solid Snake from Metal Gear Solid 4: Guns Of The Patriots by Stefanos