He was created by Walt Disney and Ub Iwerks at the Walt Disney Studios in 1928. An anthropomorphic mouse who typically wears red shorts, large yellow shoes, and white gloves, Mickey has become one of the most recognizable cartoon characters in the world.

Mickey officially debuted in the short film Steamboat Willie (1928), one of the first sound cartoons. Originally characterized as a mischievous antihero, Mickey's increasing popularity led to his being rebranded as an everyman, usually seen as a flawed, but adventurous hero. 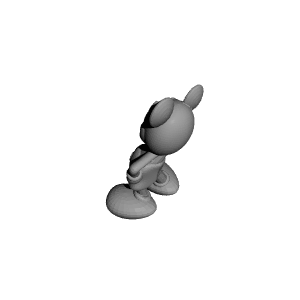 I've used support which was a bad idea. Really like the model. Good job.