3D
360°
Featured
31,001 views 3,559 downloads
40 collections
Community Prints Add your picture
Be the first to share a picture of this printed object
6 comments

I printed it upside down.Darth Vader is a fictional character in the Star Wars franchise. Born as Anakin Skywalker, the character is a primary antagonist in the original trilogy and a primary protagonist in the prequel trilogy. Star Wars creator George Lucas has collectively referred to the first six episodic films of the franchise as "the tragedy of Darth Vader".[1]

Originally a slave on Tatooine, Anakin Skywalker is a Jedi prophesied to bring balance to the Force. He is lured to the dark side of the Force by Palpatine and becomes a Sith Lord. After a lightsaber battle with his former mentor Obi-Wan Kenobi, in which he is severely burnt and dismembered, Vader is transformed into a cyborg. He then serves the Galactic Empire as its chief enforcer until he ultimately redeems himself by saving his son, Luke Skywalker, and killing Palpatine, sacrificing his own life in the process.[2] He is also the secret husband of Padmé Amidala, father of Princess Leia, and grandfather of Kylo Ren.

I printed it upside down 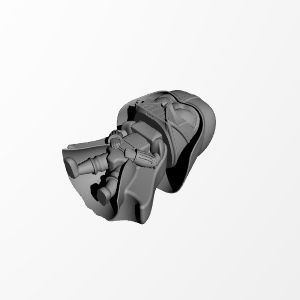 ×
40 collections where you can find mini Darth Vader by SzonyiBalazs