3D
Support Free Scan The World
4,448 views 191 downloads
5 collections
Community Prints Add your picture
Be the first to share a picture of this printed object
0 comments

This Mithraic bronze depicts a lion's face, probably once part of a fountain of worship. Mithraism, also known as the Mythraic mysteries, was a mystery religion centred around the god Mithras that was practised in the Roman Empire from about the 1st to the 4th century. The religion was inspired by Persian worship of the god Mithra (proto-Indo-Iranian Mitra), though the Greek Mithras was linked to a new and distinctive imagery, and the level of continuity between Persian and Greco-Roman practise is debated. The mysteries were popular in the Roman military.

One of the most characteristic features of the Mysteries is the naked lion-headed figure often found in Mithraic temples, named by the modern scholars with descriptive terms such as leontocephaline (lion-headed) or leontocephalus (lion-head). He is entwined by a serpent (or two serpents, like a caduceus), with the snake's head often resting on the lion's head. The lion's mouth is often open, giving a horrifying impression. He is usually represented as having four wings, two keys (sometimes a single key), and a scepter in his hand. Sometimes the figure is standing on a globe inscribed with a diagonal cross. In the figure shown here, the four wings carry the symbols of the four seasons, and a thunderbolt is engraved on the breast. At the base of the statue are the hammer and tongs of Vulcan, the cock, and the wand of Mercury. A more scarcely represented variant of the figure with a human head is also found. 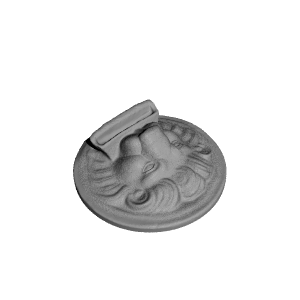 ×
5 collections where you can find Mithraic Lion Face at The Curtius Museum, Liege by IOxOI