Model for a monument to Pope Alexander VII

3D
Scan The World
3,763 views 146 downloads
Community Prints Add your picture
Be the first to share a picture of this printed object
0 comments

Model for a monument to Pope Alexander VII

This is a preliminary sketch model for the marble figure of Pope Alexander VII, designed for his tomb in St Peter's in Rome. Alexander VII originally commissioned the monument from the leading baroque sculptor, Gianlorenzo Bernini, for St Peter's, but the succeeding Pope, Clement IX, wanted to place it in Sta Maria Maggiore, opposite his own. However, Clement IX's successor, Clement X, reverted to the original plan.

The present model - which depicts the Pope kneeling on a cushion, his hands clasped in prayer, with his papal tiara under the flowing cope - is an autograph work by Bernini. It conforms relatively closely to the finished monument, and relates also to one of the drawings for the tomb now in the Royal Collection at Windsor, which was apparently made for an earlier proposed monument in the church of Santa Maria Maggiore. The full-scale wood model with clay figures was completed in 1672, when Bernini received his final payment, but the actual monument was not finished until May 1678, when the Pope's body was transferred to it. Bernini delegated all marble carving for the tomb to assistants, who carried out this work from 1672-8. The terracotta is therefore exceptionally important as a preparatory work by the master himself.

This summary sketch reveals much about Bernini's working methods. He modelled the head separately, so that he could experiment with its angle before positioning it on the body. As with the only other surviving terracotta model for the tomb (a figure of Charity, now in the Istituto delle Belle Arti in Siena) tool marks are evident, and there are suggestions of thumb and finger prints. The hands are now missing, and there are some significant surface cracks, but the model is comparatively intact. It is a remarkable testament to Bernini's handling of clay on a small scale in preparation for what was to be a magnificent monumental Papal tomb. 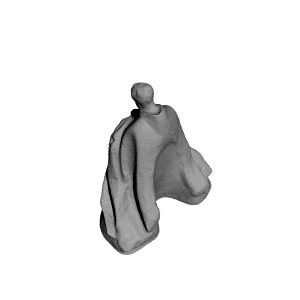