3D
Scan The World
2,503 views 71 downloads
Community Prints Add your picture
Be the first to share a picture of this printed object
0 comments

Roel D' Haese ( 1921 - 1996 ) was a Flemish sculptor and graphic artist. He is considered the most famous Flemish surrealist sculptor. In 1958, his sculptures as "Falbeldier" and "Pilgrim" is selected for the 29th Venice Biennale. In the same year he gets a solo exhibition at the Centre for Fine Arts in Brussels; in 1959 he was at Documenta II. For the Expo 58 in Brussels, he designed the monumental work "The meerkat" depicting a wijfjesaap set for the Fauna Palace. In the summer of 1965 he exhibited together with César and Jean Tinguely at the Musée des Arts Décoratifs in Paris. Thus, the standard for the new sculpture is put.
In 1969 he made the big monumental sculpture "L'Aviateur" for Hermann-Debroux station of the Brussels Metro. "The song of evil", an equestrian statue in 1964, is one of his masterpieces, but his monument to John Light, intended as a tribute to Louis Paul Boon, provoked a riot and was denied by the city aalst which it was originally intended, in 1981. The picture finally came into the sculpture Middelheim in Antwerp in 1987.

Medium difficult, has much supports and thin zones. It requires high doses of patience. 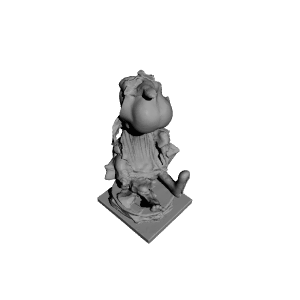 ×
0 collections where you can find Moira en Feuille Morte at The Middelheim Museum, Antwerp by Scan The World