The Discovery of Moses

3D
Scan The World
4,500 views 314 downloads
4 collections
Community Prints Add your picture
Be the first to share a picture of this printed object
0 comments

The Discovery of Moses

The group of The Discovery of Moses was Allasseur's first notable Salon success, winning a medal in 1853 with the plaster model and a second medal when he exhibited a marble version six years later.  The group had an enduring importance for the sculptor when it ultimately won him a silver medal at the 1889 Paris Exposition Universelle.  A pupil of David d'Angers, Allasseur made his debut at the Salon in 1846 and was created a Chevalier of the Légion d'Honneur in 1867.

According to the Book of Exodus, Moses was born in a time when his people, the Israelites, an enslaved minority, were increasing in numbers and the Egyptian Pharaoh was worried that they might ally themselves with Egypt's enemies. Moses' Hebrew mother, Jochebed, secretly hid him when the Pharaoh ordered all newborn Hebrew boys to be killed in order to reduce the population of the Israelites. Through the Pharaoh's daughter (identified as Queen Bithia in the Midrash), the child was adopted as a foundling from the Nile river and grew up with the Egyptian royal family. After killing an Egyptian slavemaster (because the slavemaster was smiting a Hebrew to death), Moses fled across the Red Sea to Midian, where he encountered The Angel of the Lord, speaking to him from within a burning bush on Mount Horeb (which he regarded as the Mountain of God).

God sent Moses back to Egypt to demand the release of the Israelites from slavery. Moses said that he could not speak with assurance or eloquence, so God allowed Aaron, his brother, to become his spokesperson. After the Ten Plagues, Moses led the Exodus of the Israelites out of Egypt and across the Red Sea, after which they based themselves at Mount Sinai, where Moses received the Ten Commandments. After 40 years of wandering in the desert, Moses died within sight of the Promised Land on Mount Nebo.

Jean-Jules Allasseur (13 June 1818 — 1903) was a French sculptor, a pupil of Pierre-Jean David called David d'Angers at the École des Beaux-Arts, Paris, who produced portrait sculptures, memorial allegories and decorative architectural sculpture for official commissions under the Second Empire. He was made a chevalier of the Legion of Honor, 7 August 1867.

He is buried at the cemetery of Montmartre (14th division) where he kept his studio. 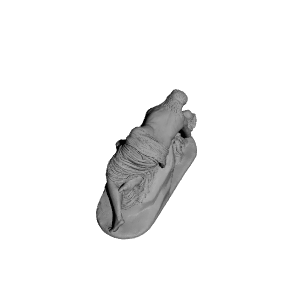