3D
360°
Scan The World
1,723 views 82 downloads
Community Prints Add your picture
Be the first to share a picture of this printed object
0 comments

Anna Andreyevna Gorenko (1889–1966), better known by the name Anna Akhmatova, was one of the most significant Russian poets of the 20th century. She was shortlisted for the Nobel Prize in 1965 and her strong and clear leading female voice struck a new chord in Russian poetry. Her work ranges from short lyric poems to intricately structured cycles, such as Requiem (1935–40), her tragic masterpiece about the Stalinist terror.

This monument to Anna was created by sculptor Galina Dodonova and architect Vladimir Reppo and it was erected in 2006 to mark the 40th anniversary of the poet's death. The statue is symbolically located opposite Kresty Holding Prison, where both Akhmatova's partner, the art critic Nikolay Punin, and son, Lev Gumilev, were incarcerated repeatedly during the 1930s. Akhmatova wrote that she spent "300 hours" among the crowd of wives and mothers in front of the prison, waiting for news and trying to pass provisions to their loved ones inside. 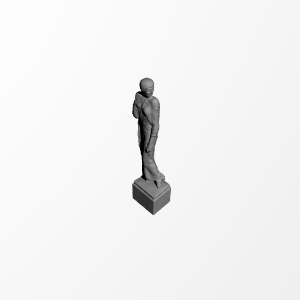