3D
Scan The World
2,064 views 73 downloads
Community Prints Add your picture
Be the first to share a picture of this printed object
0 comments

This memorial statue dedicated to the artist Emmanuel Fremiet had been commissioned by the Jardin des Plantes and the Museum National d'Histoire Naturelle in Paris. This bronze sculpture was sculpted by another French artist, Henri Greber, in 1913 and depicts Fremiet at work as a sculptor himself producing a piece of art.

Emmanuel Fremiet was an animal sculptor that worked at the Jardin des Plantes and later became the professor for animal drawing at the Natural History Museum.

In the pedestal of the sculpture the relief, designed by Henri Greber, represents the equestrian statue of Joan of Arc that Fremiet actually produced for Napoleon III.

The second bronze bas-relief is located on the back of the base of the Emmanuel Fremiet statue, and this particular one depicts a bear hunter with a bear, which was another bronze statue that Fremiet himself created. 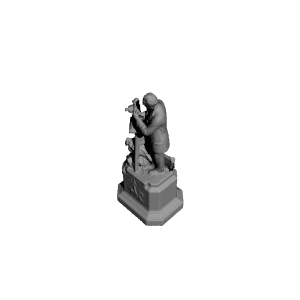