3D
360°
Scan The World
1,614 views 116 downloads
Community Prints Add your picture
Be the first to share a picture of this printed object
0 comments

This is a 2nd century AD copy of a Greek original of the 4th century BC.

Moschion was an Athenian tragic poet. Three titles and a few fragments of his plays are preserved by Joannes Stobaeus. He wrote a Telephus, and two historical plays: Themistocles, of which we have a three line fragment, and the Men of Pherae (Pheraioi), which dealt with the death of Jason, the cruel tyrant of Pherae.  Also extant are 33 lines of a speech from an anonymous play which deals with the history of human progress. In this fragment, he states that humans originally lived like animals, without houses or technology, law was absent, and cannibalism was rife. In the course of time, agriculture, cooking, wine, houses, and cities were introduced, civilisation was born, and people buried their dead so that people would not be reminded of their earlier cannibalism. 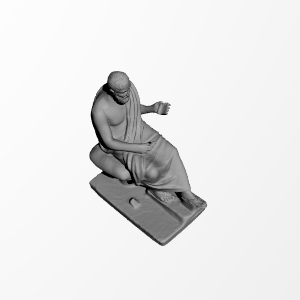 ×
0 collections where you can find Moschion by Scan The World