Moses (Ic. 1513–1515) is a sculpture by the Italian High Renaissance artist Michelangelo Buonarroti, housed in the church of San Pietro in Vincoli in Rome.

The work was commissioned in 1505 by Pope Julius II for his tomb. The work depicts a seated Moses with horns on his head. This is believed to be a mistranslation of the Hebrew Scriptures in Latin by St. Jerome. Moses is actually described as having "rays of the skin of his face", which Jerome in the Vulgate had translated as 'Horns'. In his arms he carries the tablets of the law - the stones inscribed with the Ten Commandments that he has just received from God on Mt. Sinai.

Although his tomb for Pope Julius II was never completed, Michelangelo shows his restless genius at play, because of this the seated Moses is considered his most important work.

Note: This is only the upper half of the sculpture. 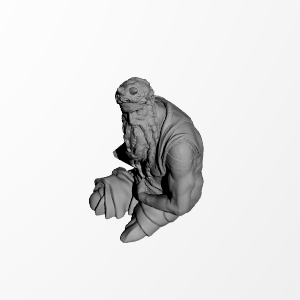 12.5 cm tall printed on an ender 5 plus. Printed with supports connected to the raft (45 degree overhang support). Printed hollow with 4 layers on the inner shell. Had troubles trying to print it any larger. Any suggestions are appreciated.