Mount for Impulse Sprinkler on Green Metal U Post

3D
2,398 views 70 downloads
1 collection
Community Prints Add your picture
Be the first to share a picture of this printed object
0 comments

Mount for Impulse Sprinkler on Green Metal U Post

It's garden planting time again... which means it's also watering time. The catch is that most sprinkler systems are designed to be low to the ground, so placing one in your garden will soon mean no water gets past the leaves of the nearest plants. We've used various mounts to put a cheap impulse sprinkler high enough to water our 1800sqft garden -- here's a simple 3D-printed piece that mounts the sprinkler on a standard green metal U post.

I used clear PLA to make this part so that it would be easier to see if exposure to sun and water is degrading the PLA -- I just made this, so I don't know how long it will last. It's an easy part to print, and plenty strong with very low fill (e.g., 8%) and thin walls. The part is quite tall (not a problem for our MakerGear M2), but you can reduce the height of the X-cut section quite a bit and have it still work to firmly hold a typical sprinkler's mounting spike. I actually printed the part upside-down so that the PLA would glass nicely on the top edge -- where water is most likely to drip. In case you were wondering, the X-cut is open on one edge so that water doesn't get trapped against the PLA in the cut.

The part simply nests in the U of any size standard green U post. A hole in the part allows a 1/4 20 bolt to be worked through (it isn't threaded, but is a tight fit), and that bolt is secured through one of the standard holes in the U post using a nut. Just to be paranoid, I also tightened an orange nylon cable tie around the post and part. The spike of the sprinkler simply drops into the X-cut at the top. It is slightly better to have the water supply hose on the opposite side of the post from that shown in the photo so that the hose is directly pulling against the post rather than pulling against the part... but the sprinkler can simply be pulled up, turned around, and reinserted into the X-cut in any orientation you want.

Total cost? The plastic spike impulse sprinkler was something like $3. The U post varies with size, but is generally less than $6. The bolt, nut, and cable tie are less than $1. In sum, cheap. ;-) 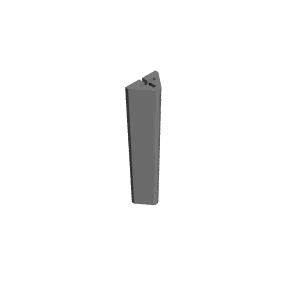