My Little Pony is an entertainment franchise developed by Hasbro which is marketed primarily to girls. It started as a line of plastic pony toys developed by Bonnie Zacherle, Charles Muenchinger and Steve D'Aguanno which have been produced since 1983. The ponies feature colorful bodies, manes and a unique symbol on one or both sides of their flanks. These are referred to in the two most recent incarnations as "cutie marks." My Little Pony has been revamped at least four times with new and more modern looks to appeal to a new market. 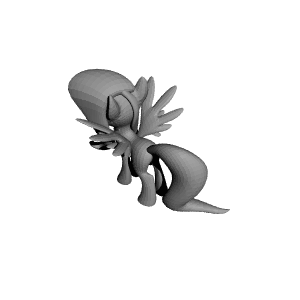 ×
11 collections where you can find My Little Pony by Inga
×
somebodyaswell
@somebodyaswell
7
Printed on: PowerSpec 3D Pro
Material: PLA
Posted at: 29th May 2018

LOVE IT, Its was a little tricky to get the pre-built supports to work, but it wasn't to bad. Thank You :D